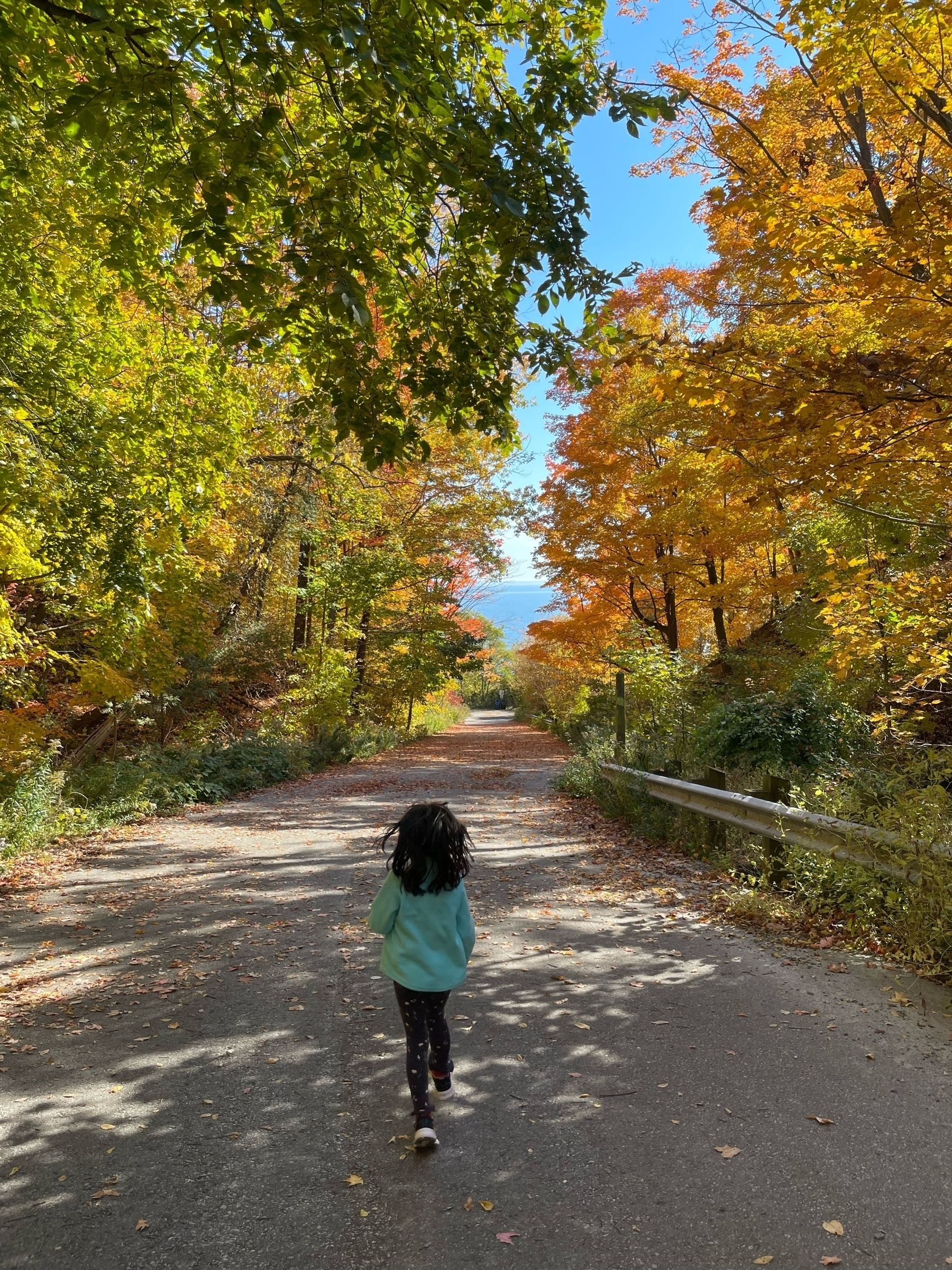 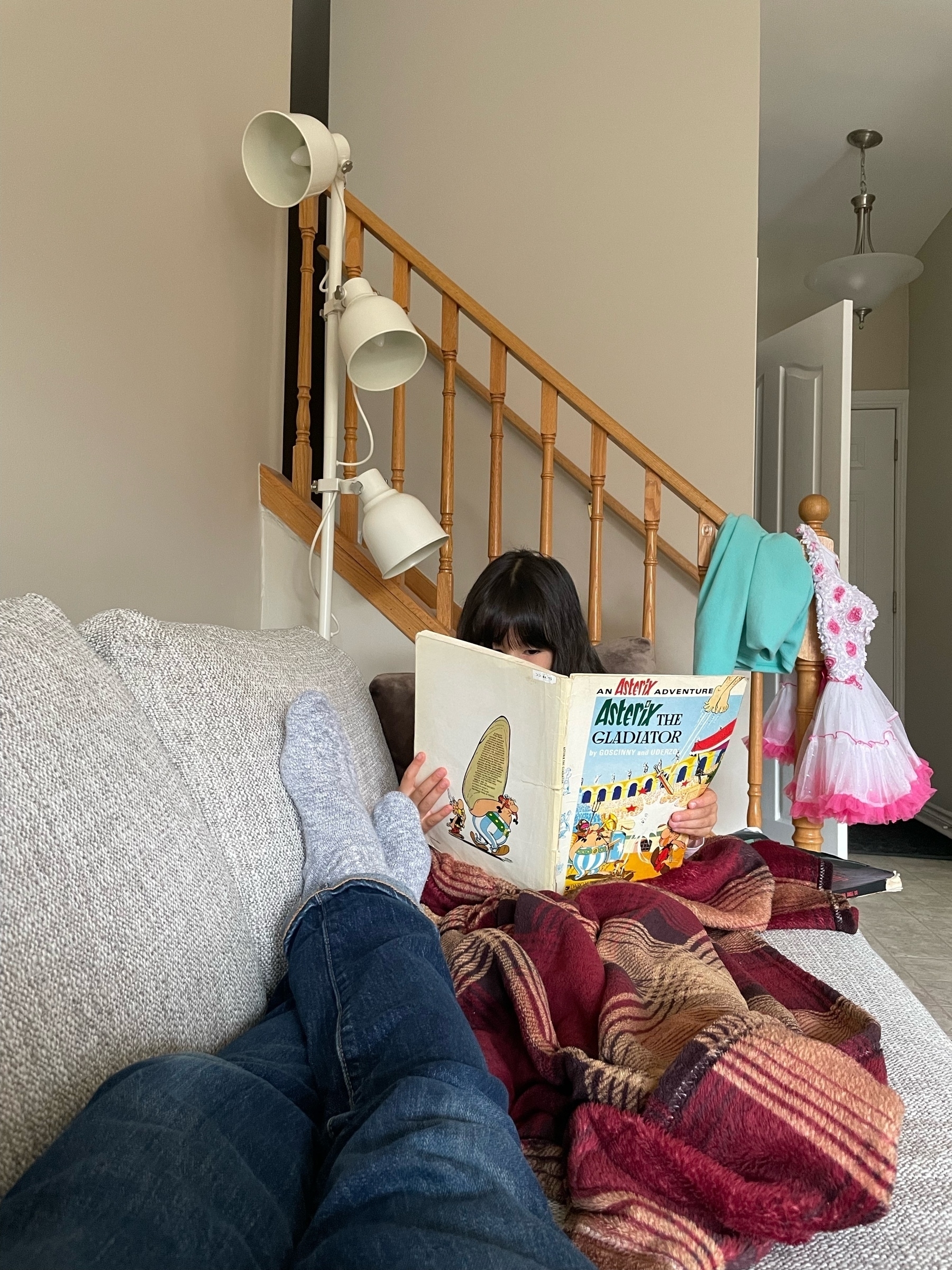 In 1933, at the age of eighteen, Patrick Leigh Fermor began to walk from the Hook of Holland to Constantinople. Years later his notes and reflections became two book length treatments of the trip: A Time of Gifts and Between the Wood and the Water (joined posthumously by an unfinished draft of the last portion of the journey, The Broken Road). These have been favourites of mine for a long time, and I recently decided to re-read them.

One day I hope to repeat portions of Fermor’s walk in person; this time, I decided to follow along virtually. While I didn’t start with a plan, I quickly settled on a straightforward approach: I read each chapter with a pen and notebook handy, recording place names and key details as they appeared in the narrative. Once a chapter was complete, I took my notes to the computer. Initially I began looking place names up on Google Maps and saving the results as a starred location. Google Maps isn’t ideal for this, though, and so I switched to a new product, Felt. “the best way to make maps on the internet.” I figured this was a pretty good use case.

The result has been a map that develops as I read. I’m not taking advantage all of Felt’s features, but the basic ones are quite useful. I can look up and mark locations on the map, distinguishing by pin type where it makes sense (I’ve been marking castles and churches in particular). I can trace a walking route between pins; I’m not trying to mirror the specific route Fermor took – In many places, that might be impossible even if it was well documented – but it is nice to think that the route is snapping to a walking route, even if it probably isn’t the exact one Fermor used.

I’m not sure how surprising this should be, but the exercise has been exceptionally satisfying. Taking notes while reading has made me a more active, engaged participant in the story; tracing locations on a map has made the journey real in a way that I previously haven’t had access to (I don’t have any personal experience with walking Central Europe)! It helps, of course, that the map is a rich one. Fermor is able to name an amazing number of villages, towns, abbeys, cathedrals, and castles. In sequence, they come together into a realized, highly plausible reconstruction of the journey.

The exceptions are, in many cases, by design. Fermor is welcomed into the homes and histories of many titled families along his journey. These parts of the story are some of the most interesting, but Fermor is understandably reticent about the particulars of many of these visits.

As far as reconstructing the route goes, however, this discretion will not do. And in places, Fermor includes so many potentially identifying details he is practically inviting a little bit of sleuthing, a little bit of work on the part of the reader to fill in these particulars he, with some discretion, has left out. I was happy to leave these parts of the trip fuzzy on previous reads, but this time around I am invested in accuracy! And so where we have some details of a visit or a stop, but no explicit identifying information, I’ve felt compelled to spend at least a little bit of time tracking down a hint of the particulars.

Here’s one example of this.

Chapter 6 of A Time of Gifts finds the young Fermor walking through Austria in the mid-winter of 1934, just about to turn nineteen. Working his way north of Salzburg, Fermor follows the path of the Danube. An earlier encounter with a German Baron in Ulm had opened doors into other great houses along the route. Fermor comes within reach of the first of these soon after visiting Gottweig Abbey, Austria’s Monte Cassino. Based on the understanding that he was more or less expected, he puts in a call; his hosts, despite not actually having any advance warning – the letter from the Baron would arrive a day after Fermor – welcome him in. But neither these hosts, nor the schloss itself, are ever mentioned by name.

Fermor drops a number of tantalizing clues while narrating his brief visit, however. Here’s what we know:

With these details in play, Fermor is basically begging his readers to do a bit of detective work. So I obliged.

My starting point was the information available about the castle itself. A quick google search reveals six castles within seven hours of Gottweig: Atzenbrugg, Wurmla, Viehoven, Totzenbach, Wasserburg, and Pottenbrunn. Of these, the first three aren’t equipped with moats, so we can exclude them from any further look. Google Maps says that the walk between Gottweig and Totzenbach should take around six and a half hours, which to me is a little more than an “easy half day’s walk”. The walk to Wasserburg and Pottenbrunn are around 4 hours: very reasonable. I decided to focus in on these two castles for further analysis.

I started with Schloss Wasserburg. It doesn’t look particularly castle-ly, but it does have moat. One of the top Google Search results is a Spotting History write up of the castle, which indicates that Count Carl Hugo Seilern von Aspang bought the property in 1923, 10 years before Fermor passed through. The fact that the owner at the time was Count seemed promising! A little more googling brought me to a Geni page for Count Carl Hugo, which reveals that one of his middle names was Joseph, he had at least one brother, and his wife was born in Romania. Romania isn’t Greece, but it isn’t entirely off base either. Was Fermor a guest at Schloss Wasserburg at the invitation of the Seilern von Aspangs? I decided to look into Schloss Pottenbrunn before deciding… but absent any new information, I was ready to say I had figured it out.

Schloss Pottenbrunn looks a lot more like a true castle than Wasserburg. It has a proper moat and is located close to the St. Polten line. Wikipedia tells us that it was acquired by the Trauttmansdorff family in 1926. Almanach de Saxe Gotha gives us a lot more information about this particular family: apparently some of them are princes and princesses, but cadet members are Count or Countesses von und zu Trauttmansdorff-Weinsberg. Further down the page we find Carl Joseph, one of the only Trauttmansdorffs who is plausibly the right age to host Fermor (he was born in Vienna in 1897, and died in 1976). A separate google search turns up Carl Joseph’s Geneanet page: he had a male sibling, Ferdinand, and a Czech (not Greek) wife named Johanna.

So far, so good: the castle fits (moat and all), and Carl Joseph and Johanna seem to be plausible hosts. The final piece to confirm: did they have a famous ancestor? I googled “trauttmansdorff westphalia thirty years war” and the first result is a Britannica page for Maximilian: “confidant of the emperors Ferdinand II and Ferdinand III, chief imperial plenipotentiary during the negotiations of the Peace of Westphalia, and one of the foremost political figures of early 17th-century Europe.” We’ve got our guy. Because Fermor mentions the portrait, I also did a quick google search, and it turns out the young traveller captured all the key details of the most famous portrait of the man, right down to his, smart, ugly countenance.

Our sleuthing done, we can fill one of the only significant gaps in Chapter 6: it’s extremely likely that Fermor’s last stop before Vienna was with Carl Joseph and Johanna at Schloss Pottenbrunn. 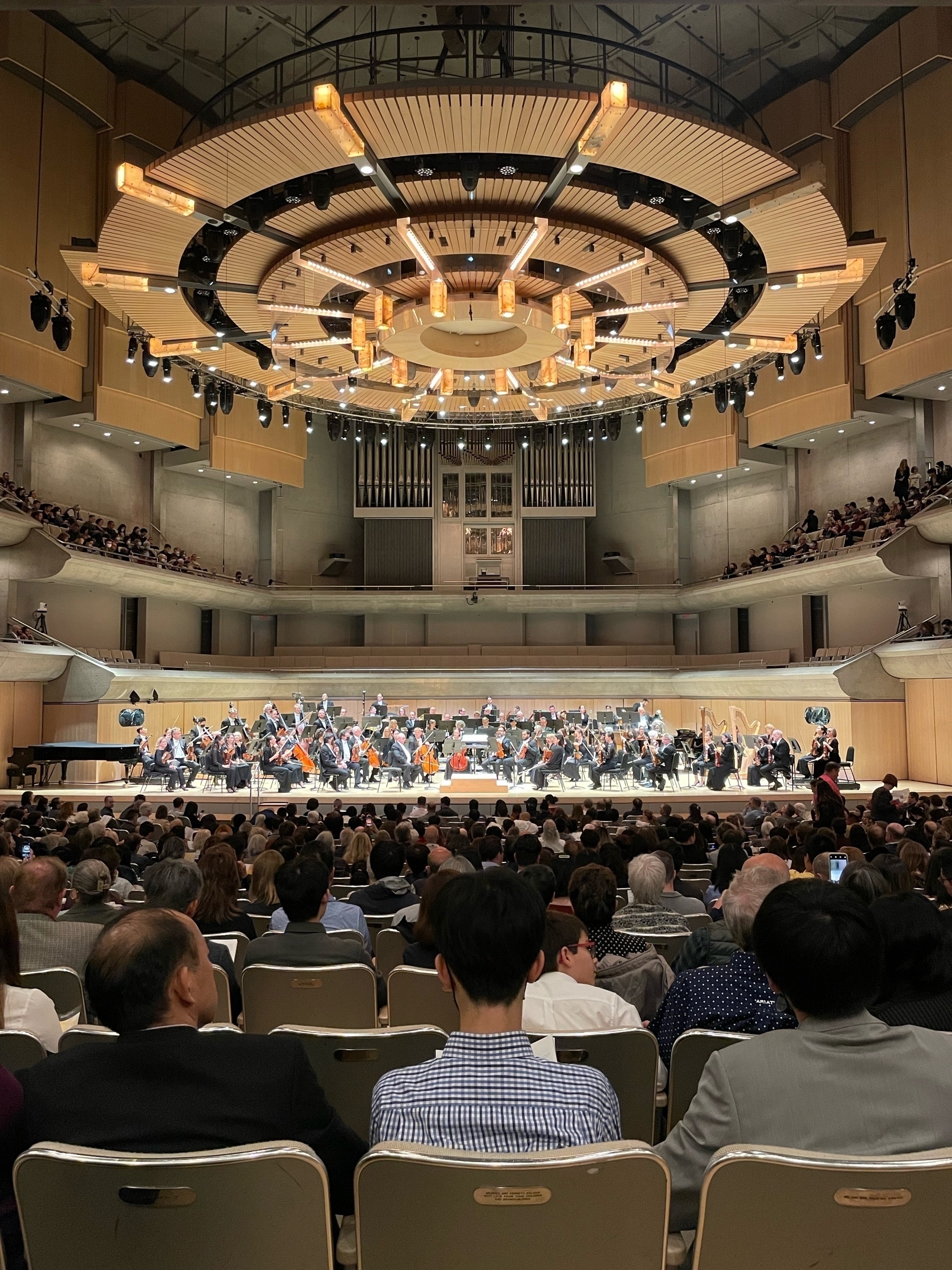 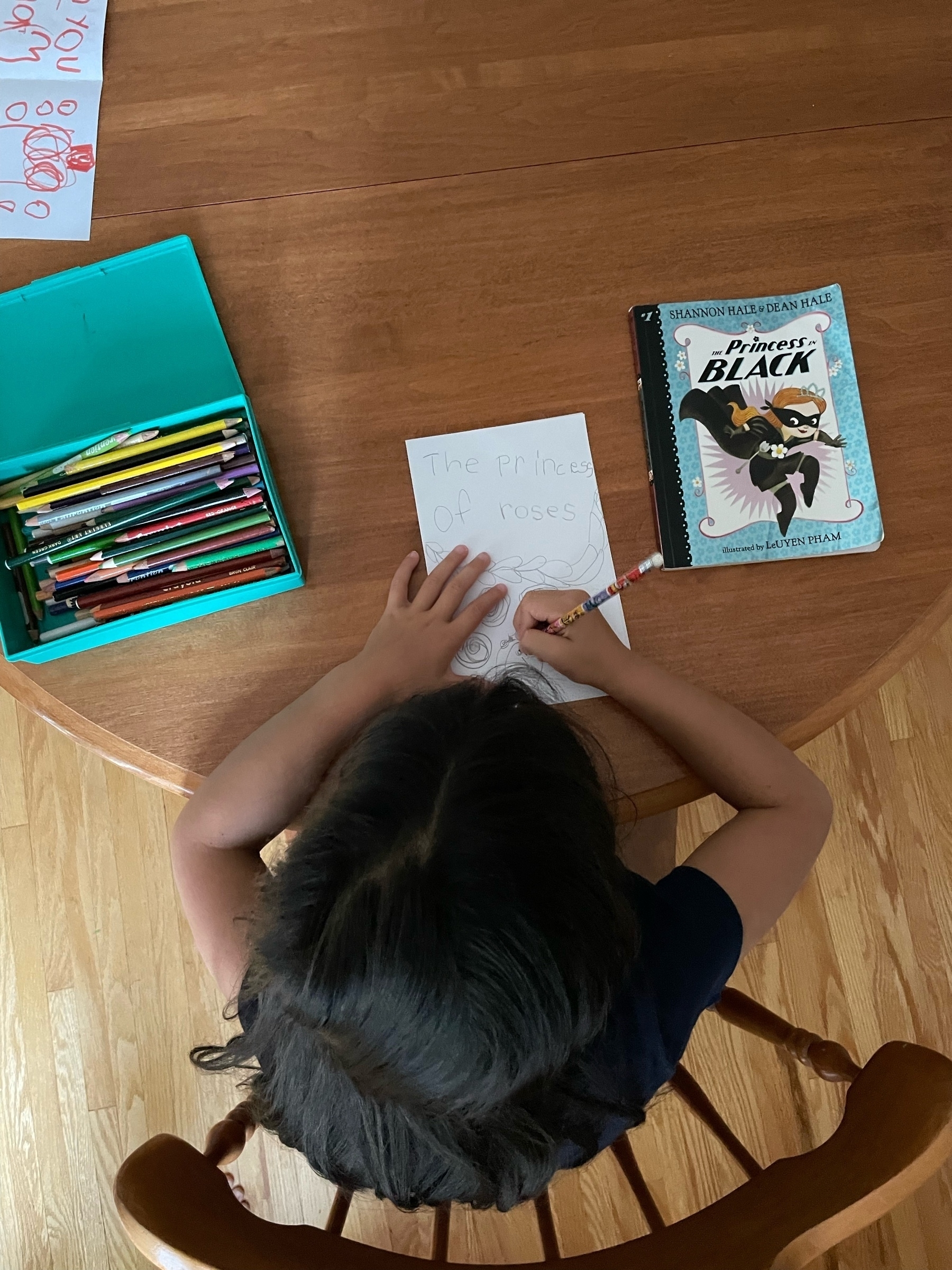 I’m re-reading Patrick Leigh Fermor’s A Time of Gifts; this time I’m building a map of his journey as I go on Felt 📚 🗺 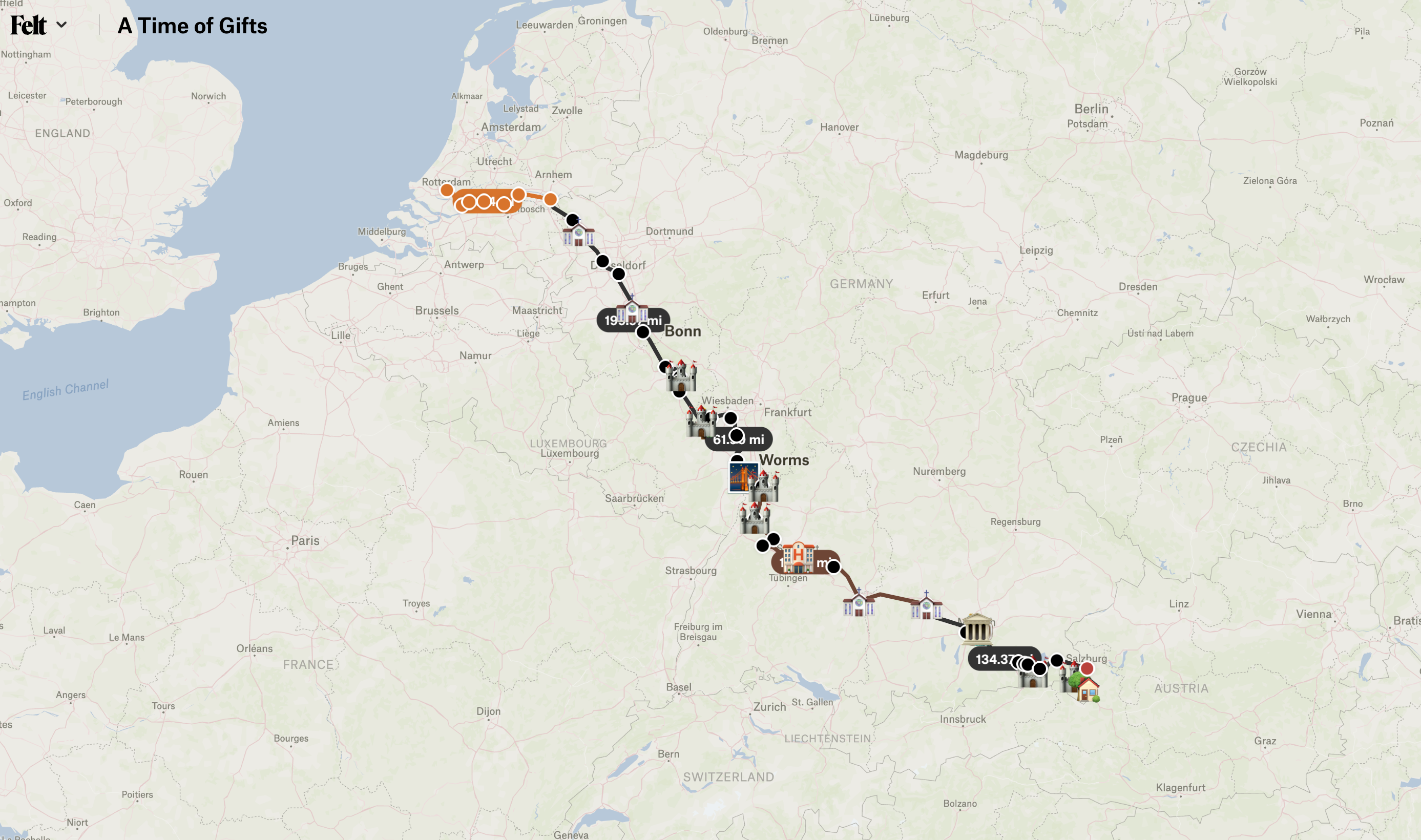 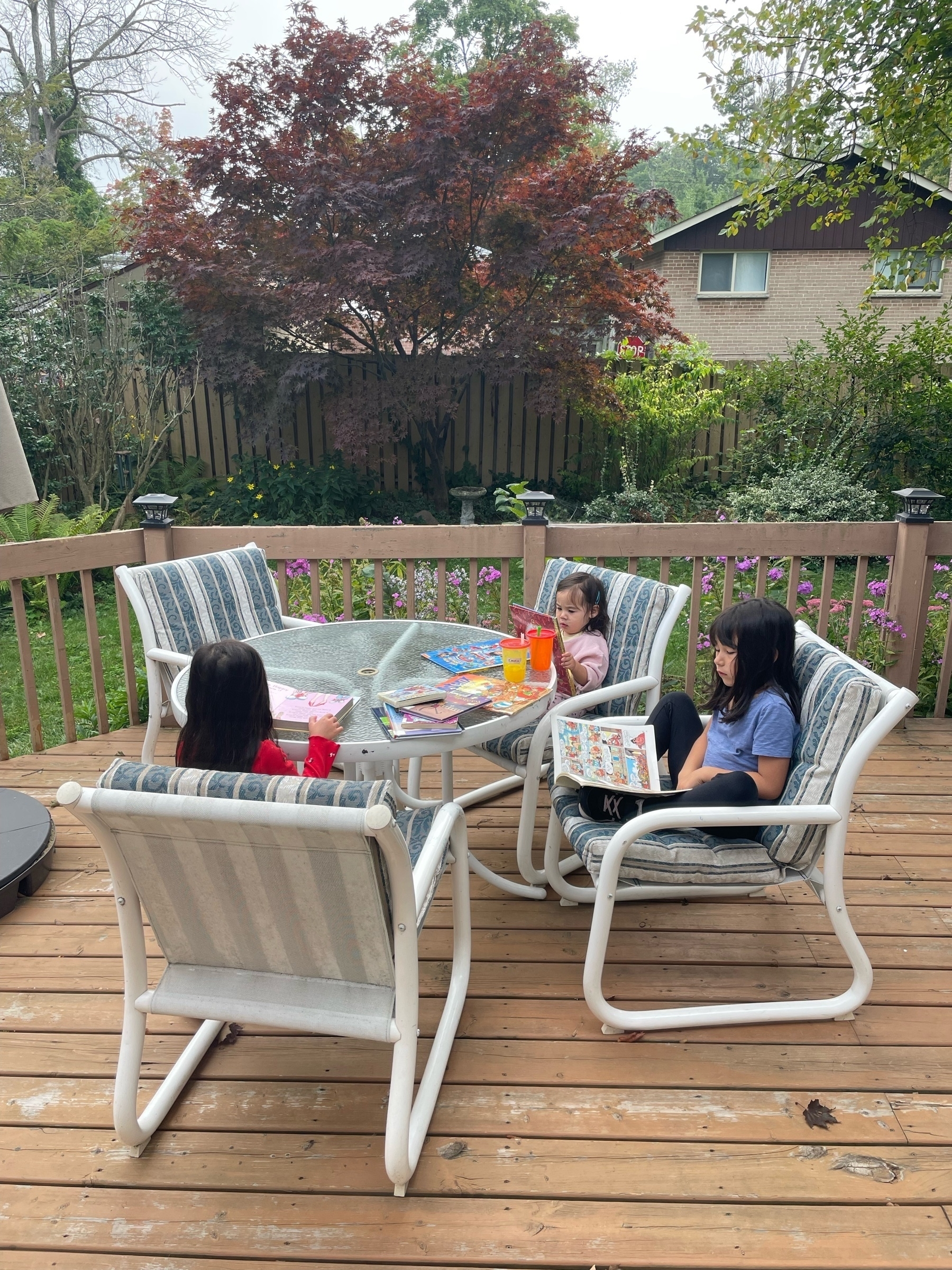 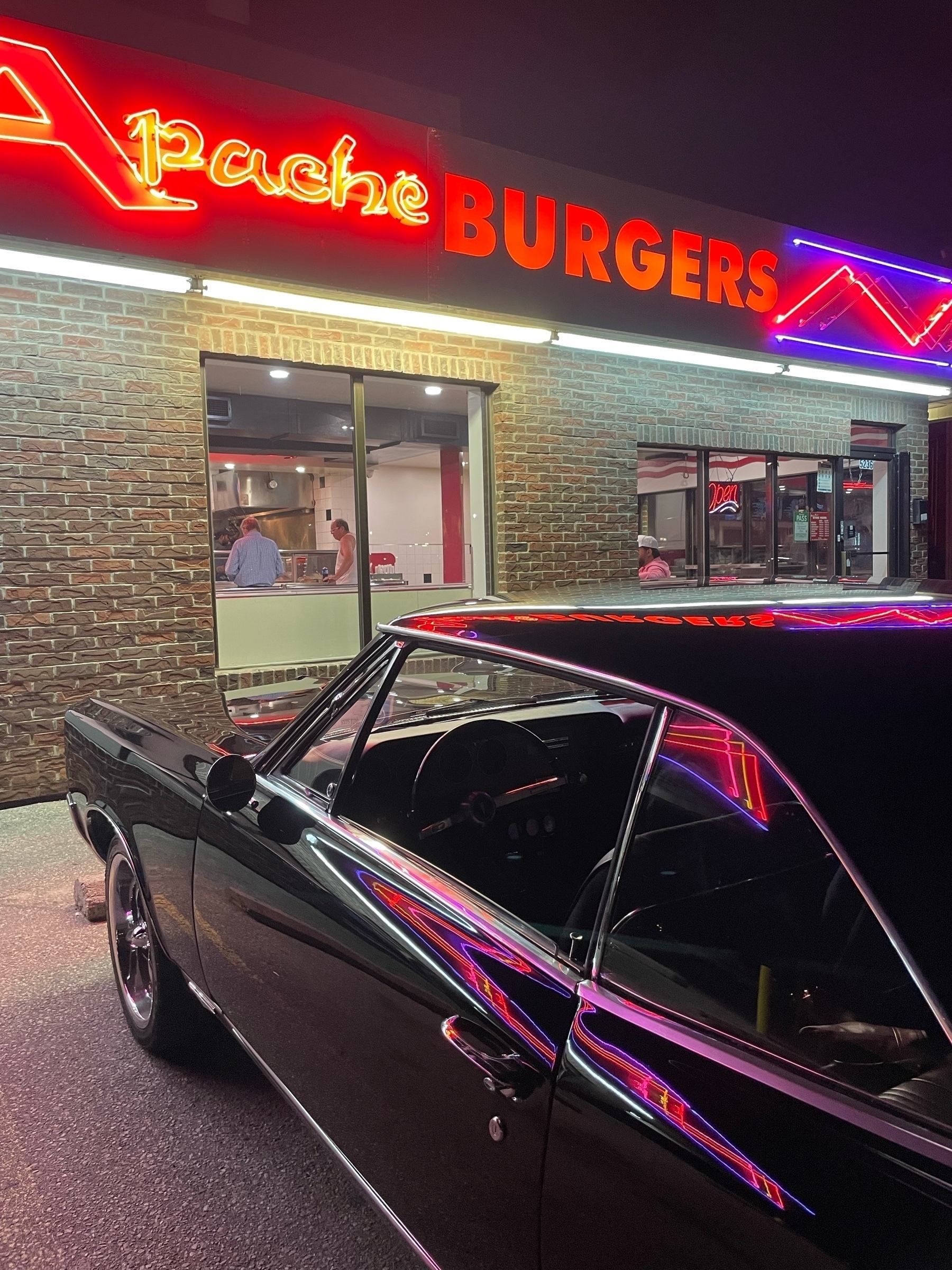 Considering one’s life requires a horribly delicate determination, doesn’t it? To get to the truth, to the heart of the trouble. You wake and your dreams disband, in a mid-brain void. At the sink, in the street, other shadows crowd in: dim thugs (they are everywhere) who’d like you never to work anything out. 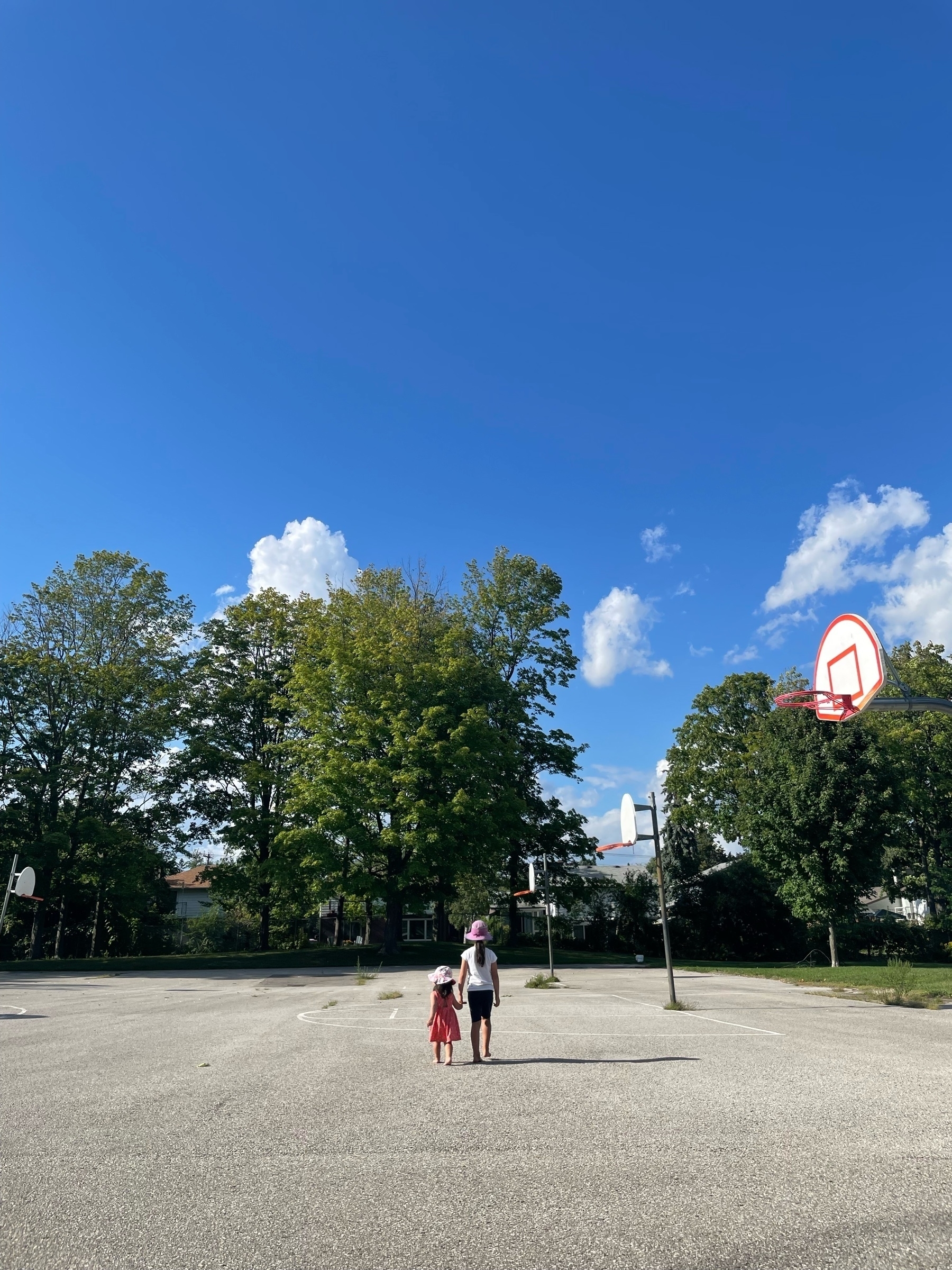 Despite knowing little or nothing of the bloody, mucky realities of land-based lives, people sometimes tell me to be careful not to romanticise the past. On this, I agree. But I tell them to be even more careful of romanticising the future.

From Mark Boyle’s The Way Home 📚.

Home from the library 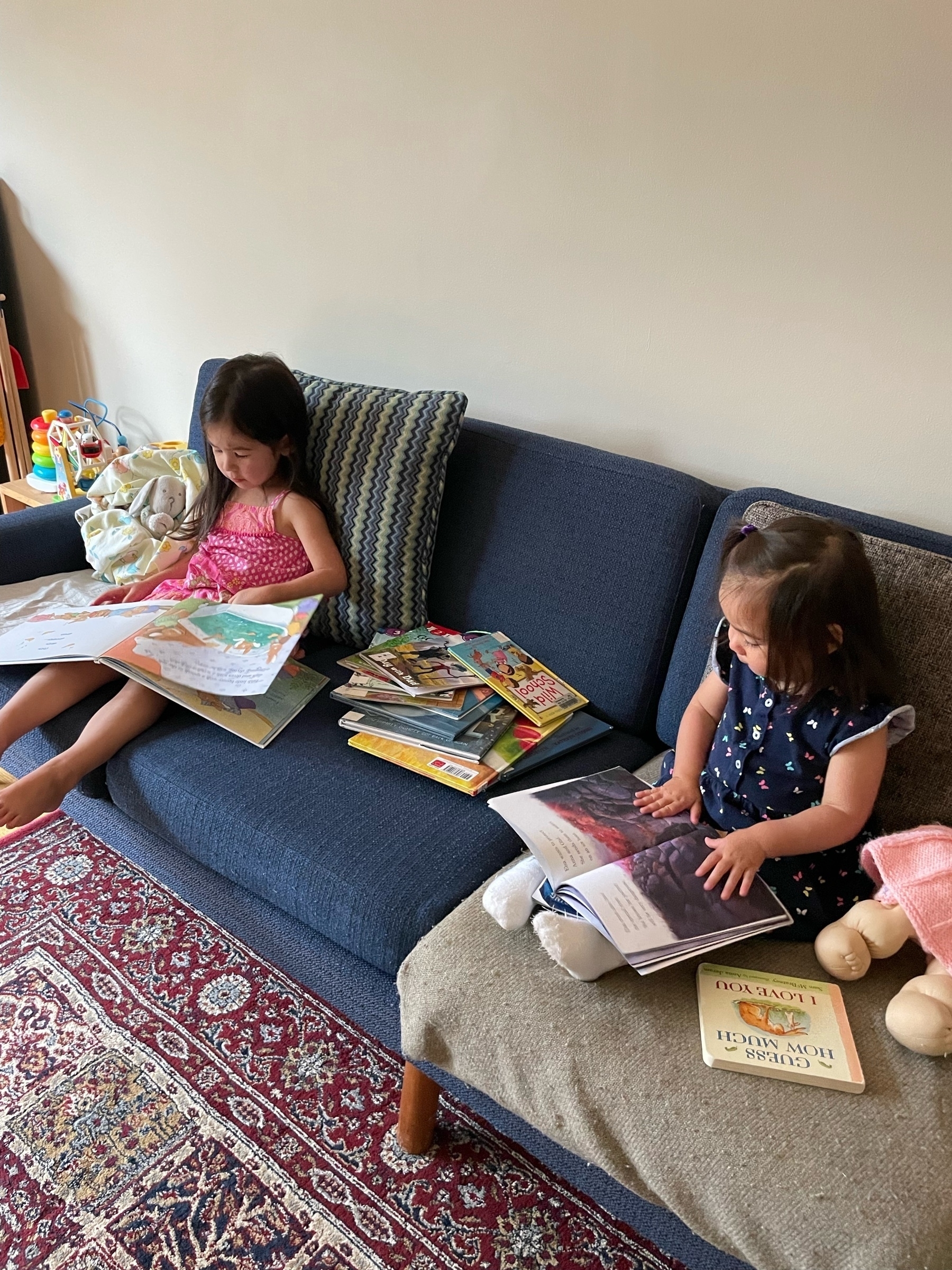 It has ever been a hindrance to some and a blessing to others that the inbred egoism of the human race blinkers even the perceptive nature. The world revolves, we can agree. But secretly each believes that it revolves around them. Knowing this is a help to the salesperson and the diplomat, but no comfort to the distressed creature who convinces themselves that the machinery of the universe has uniquely conspired to obturate them in the hunt for happiness. 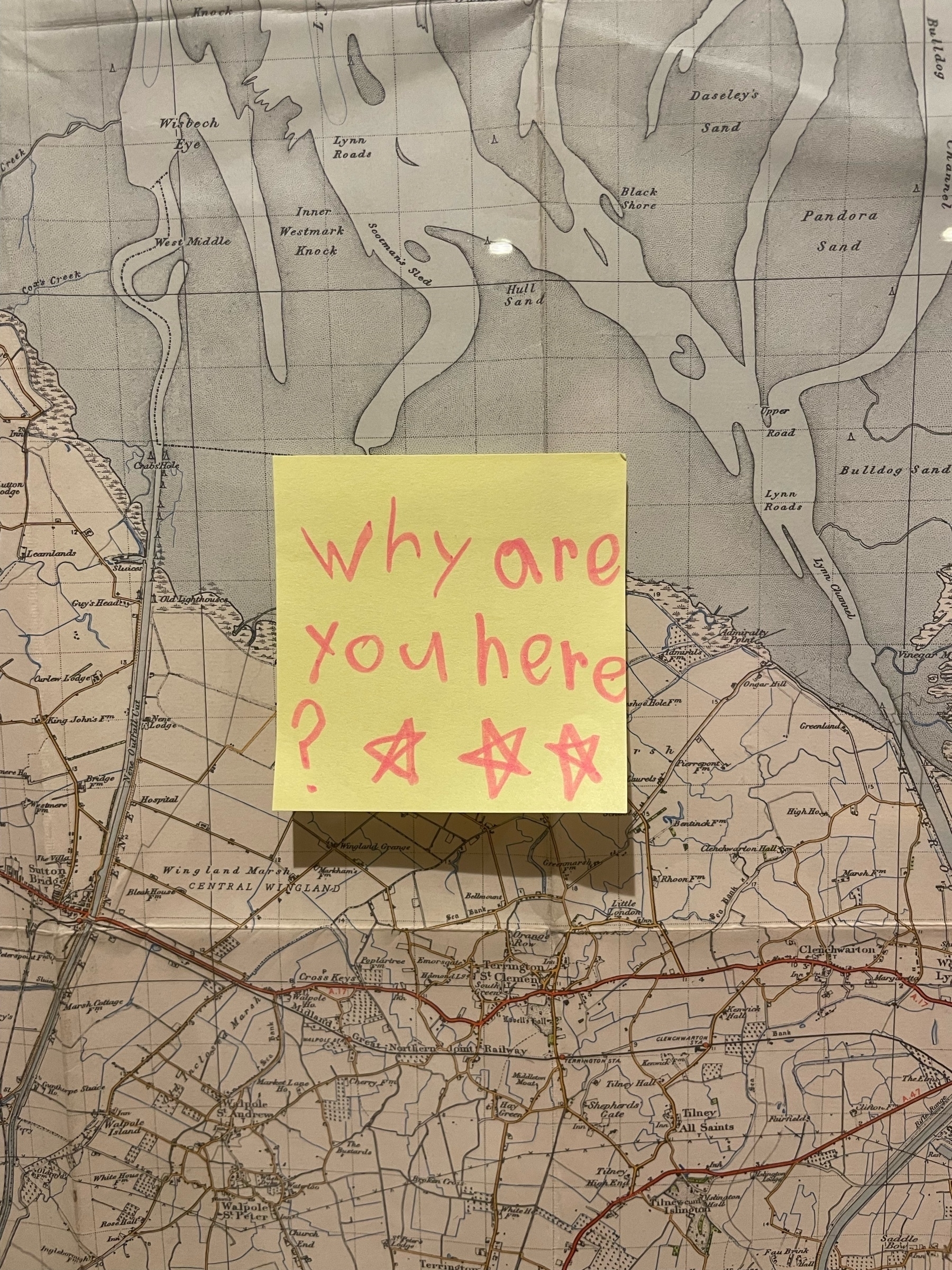 To gaze upon a childhood home through adult eyes is an act of disenchantment. Great doors grow small. Turrets vanish. Emblems fray. Even if the time spent within any given set of walls was, when the days are reckoned together, brief, it’s in the nature of childhood to guild all surfaces it touches, to magnify things. One should revisit such places only after having done some hard calculations: What are we willing to trade for a clear view of things? What are the chances we’ll regret the bargain later on?

“It’s good for kids to be bored!” After putting this into practice in various ways for a while, it is interesting to note that the result is they aren’t actually bored much at all.

New notebook on the remarkable: “I love summer” 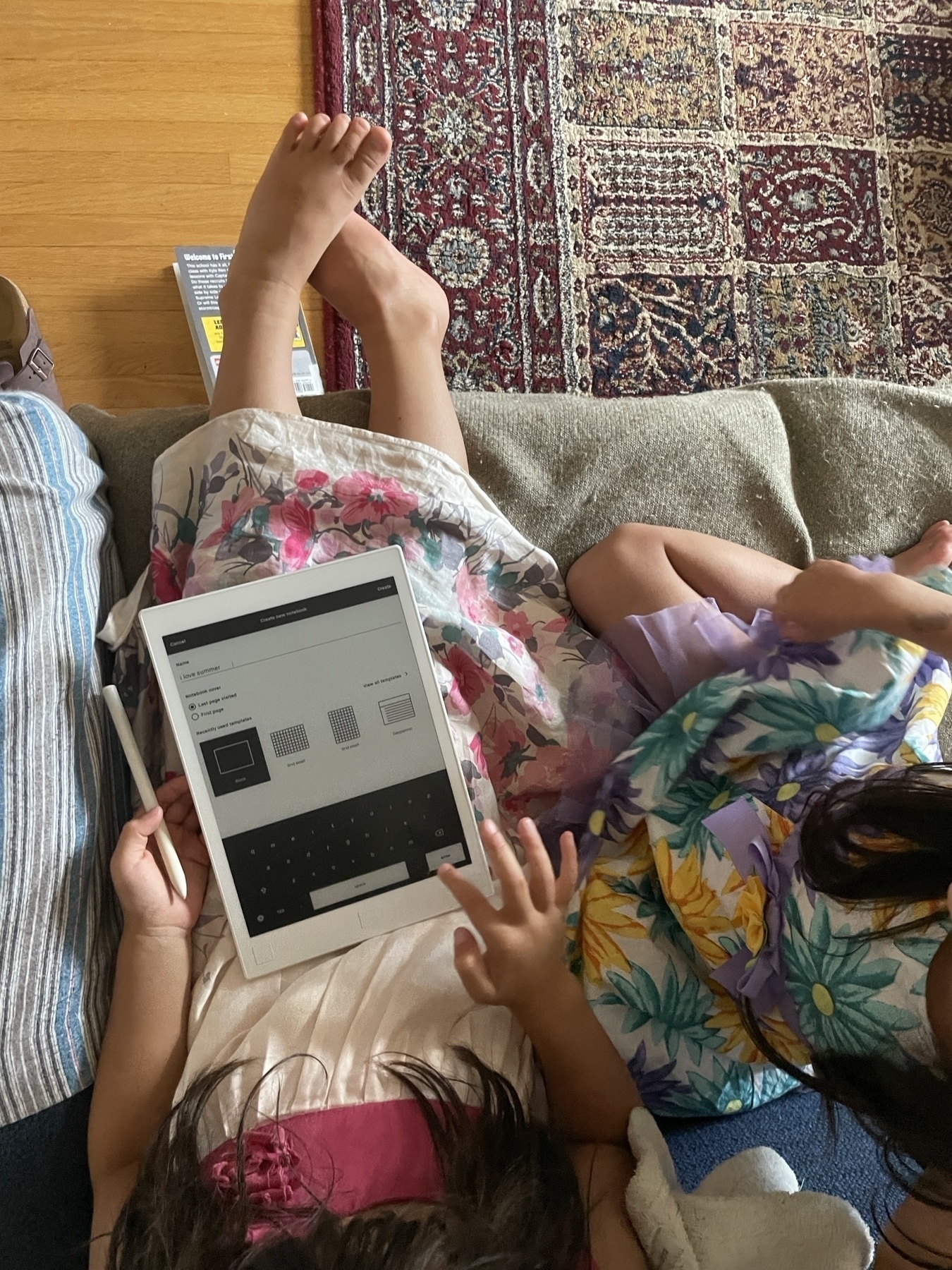 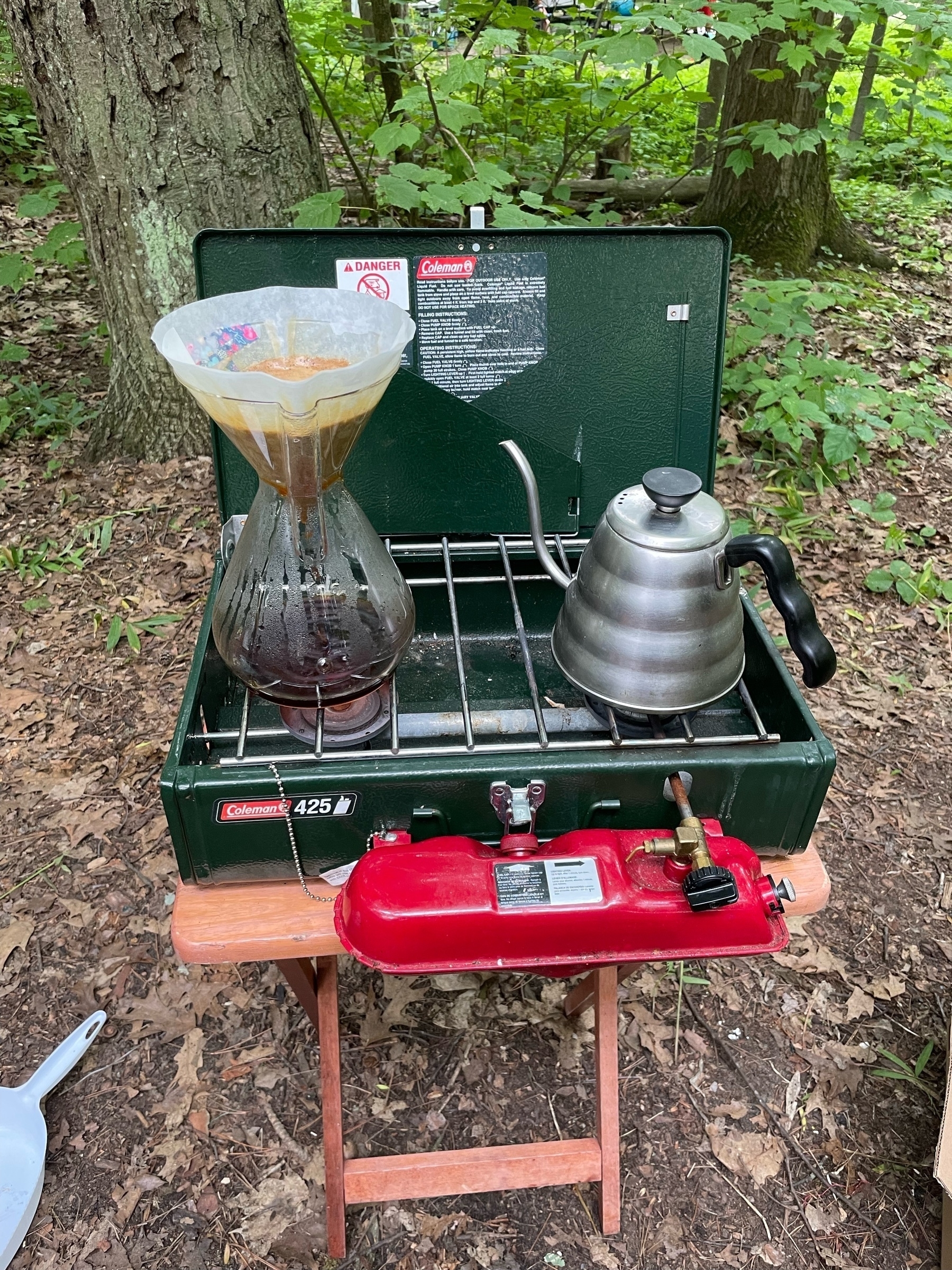 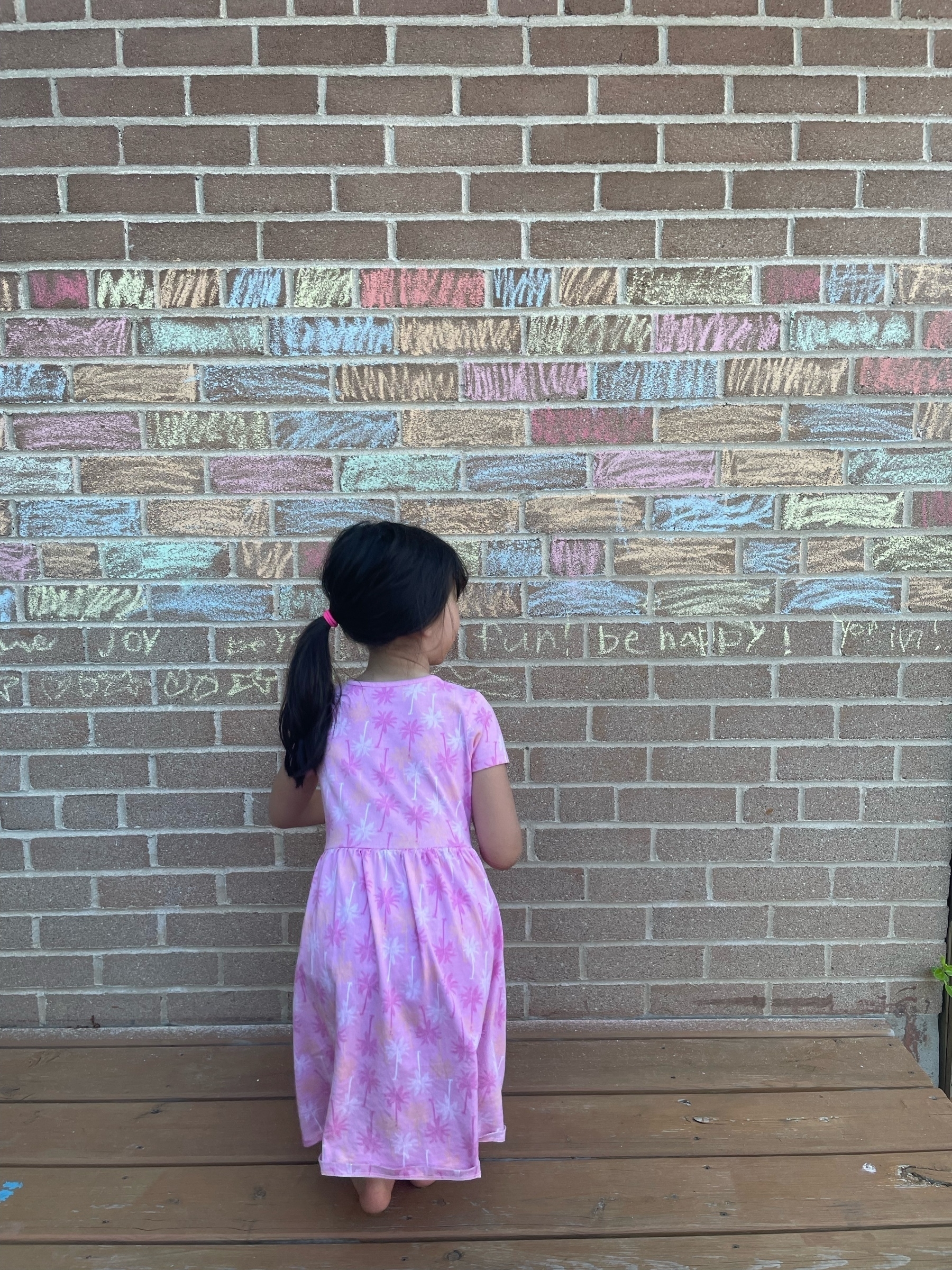